Sabah.Net is a platform of independent information superhighway which connects the State Government, the business sector and the general public, and which is designed, built,operated and managed by Sabah Net Sdn Bhd. The purpose of Sabah.Net is to realize the networked state vision comprising of one seamless network serving as the state information technology backbone to all sectors and entities that Sabah deals with.

Sabah.Net as the Backbone Infrastructure for Sabah Electronic Government Systems

The prime function of Sabah.Net is to serve as the backbone infrastructure that connects various Government Ministries, Departments and Statutory Bodies to facilitate the transformation of the operations of the public sector through the strategic deployment of information technology. The government will utilize Sabah.Net to search, collect, process, store, retrieve, manage, communicate and disseminate information for the purpose of improving the efficiency of their work and services to the public.

Sabah.Net as the Gateway to State Electronic Government Services Access

The general public can have access to the State Electronic Government Services via Sabah.Net.

Sabah.Net as the Backbone Infrastructure for Other Systems such as Electronic Commerce, Electronic Education and Others

Sabah.Net will also serve as the backbone infrastructure that connects the general public, the business sector and the education sector to facilitate the development and deployment of Electronic Commerce, Electronic Education and any other similar systems.

Sabah.Net as the Backbone Infrastructure for Communication

Sabah.Net will also be used as the backbone infrastructure by the general public, the business sector and the education sector to search, collect, process, store, retrieve, manage, communicate and disseminate information for the purpose of improving the efficiency of work and services to others.

Sabah.Net as the Gateway to the Internet

Sabah.Net has direct access to the Internet. Sabah.Net users have limited or full access to Internet services via Sabah.Net.

Sabah.Net as the Gateway to the Multimedia Super Corridor

Sabah Net Sdn. Bhd. is the exclusive operator, which designs, builds, manages and operates the Sabah.Net systems. The responsibilities of the System Operator are:

Please click on the image to get a larger view. 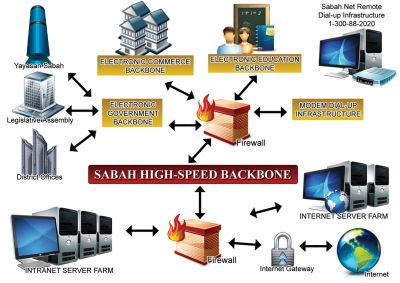 Sabah.Net is a centrally-managed Wide Area Network (WAN) running on Frame Relay technology. It supports any-to-any data communications within an organization and among organizations that are connected to Sabah.Net.

Secure network architecture is implemented to allow Sabah.Net users to interchange information in a secured manner. Hence, Sabah.Net is segregated into various network backbones according to the level of security and the provision of services in each backbone.

The High-Speed Backbone forms the heart of the Sabah.Net where all connectivity converges. It runs on Asynchronous Transfer Mode (ATM) networking technology, which can provide a transfer rate of up to 155Mbps. This is upgradable to 622Mbps in the future. Electronic Government backbone, Electronic Commerce backbone, Electronic Education backbone, and Sabah.Net Internet Gateway are interconnected via this high-speed backbone. Tight security control via leading industry Firewall is enforced to regulate communication among the backbones to avoid unauthorized access.

Instead of connecting information servers, application servers and web servers that are accessible by Internet directly to the various network backbones, these servers would be placed in the Internet Server Farm. This is to ensure minimal Internet-originated data traffics entering into Sabah.Net and hence minimizing security breach from the Internet.

A modem dial-up network infrastructure is also implemented to extend Sabah.Net services to users in remote regions.This infrastructure allows 270 concurrent users to access Sabah.Net by dialing into a toll-free number: 1-300-88-2020.